Inaugural 9-Man Challenge Cup to be held in Melville this July! 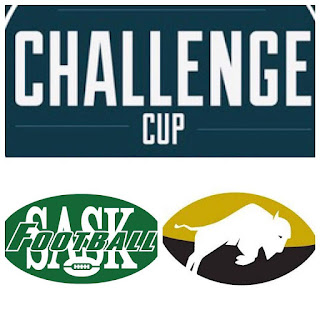 Graduating High School football players from Saskatchewan and Manitoba will have a chance to showcase their talents this summer at the Snake Pit in Melville.

The first ever 9-Man Challenge Cup will take place on July 6th and it'll feature Team Saskatchewan facing off with Team Manitoba for football supremacy.

"Unfortunately our relationship with North Dakota came to an end this year and we're always looking for the chance to showcase rural 9-man football players at a high level and so do the people in Manitoba so we thought it would be a good fit to get them involved."

Players in Grade 12 that will be graduating this Spring and Summer that competed in 9-man football this past season in either province are eligible to compete in the event. (Just asked your local 9-man football coaches for more details)

Team Saskatchewan will be holding a showcase tryout camp on May 11th and 12th in Regina.

Svenson whose also a part of the organizing committee says a great chance for Melville to host the event but it definitely a lot of people involved are needed to make it happen.

"It's a costly event to put on you have house, feed players & equip players, so it's a big undertaking with 10's of thousands of dollars needed to get it off the ground, so anyone out there listening that wants to get involved to sponsor this event it would be greatly appreciated so we can get the chance to showcase the outstanding rural 9-man football talent that our provinces have to offer."

For more information or if you want to get involved in the 2019 Challenge Cup please contact John Svenson by phone at 1-306-728-9322 or by email at: jsvenson@sasktel.net

I caught up with Team Sask Head Coach John Svenson below:


Svenson on background of Challenge Cup


Svenson on how potential graduating players can participate


Svenson on Melville getting chance to host event