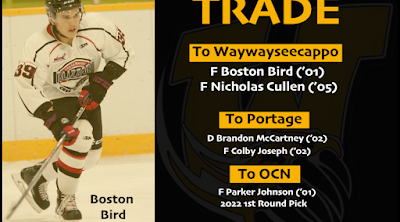 The Waywayseecappo Wolverines are excited to announce that the team has acquired the CJHL rights of 2001-Born Boston Bird from the OCN Blizzard and the MJHL rights of 2005-Born Nicholas Cullen from the Portage Terriers in a 3-way trade.

To round out the deal, the CJHL rights of Brandon McCartney and the MJHL rights of Colby Jospeh will be heading to the Terriers. Parker Johnson will be going to the Blizzard.

Bird, from Saskatoon, Saskatchewan scored 46 points in 52 games with the Blizzard in the 2019-20 season. He recently played in the NAHL with the Odessa Jackalopes and the Pictou County Crushers with the MJAHL. The 19-year-old only played 8 games and had 5 points during the 2021 campaign.

Meanwhile Cullen is from Killarney, Manitoba and has most recently played with the Southwest Cougars in the Manitoba Under-18 Hockey League. He has 53 points in 43 games over his minor hockey career.

We would like to welcome Boston Bird and Nicholas Cullen to the Wolverines organization!

The Swan Valley Stampeders have traded Forward Josh Beauchemin to the Winkler Flyers of the MJHL for a 6th round draft pick in 2022 and future considerations.

The Stampeders organization would like to thank Josh for his contributions to the team over the past two seasons and wish him and his family all the best going forward.