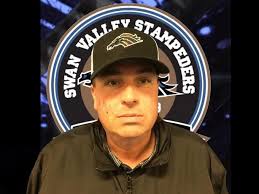 The MJHL's Swan Valley Stampeders announced on Friday that Head Coach/GM Geoff Grimwood has stepped down from his position with the hockey club and that Barry Wolff will return to team as Head Coach & General Manager.

Grimwood was named as bench boss of the hockey club earlier this year and led the team to a 16-11-2-2 record, good for 36 points and in a tie for 4th overall in the MJHL standings.

Meanwhile for Wolff, who was let go earlier this year by the BCHL's Merritt Centennials, returns to the Swan Valley after leading the Stamps to a 42-13-3-2 record in 2018/19 and a berth in their first ever MJHL Turnbull Cup Final which they eventually fell in 7 games to against the Portage Terriers.

Associate Coach Suneil Karod and Director of Hockey Operations Darren Webster will man the bench for the Stampeders when embark on a 3 game in 3 nights road-trip this weekend starting tonight (Fri) against the Steinbach Pistons.

Wolff is expected to re-join the hockey club in Swan River on Monday.