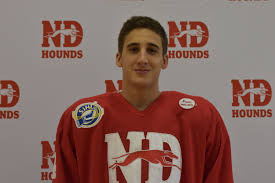 The MJHL's Swan Valley Stampeders have completed a deal with the Winnipeg Blues.

Nikbakht, a Regina product spent last year with the SJHL's Notre Dame Hounds and had 10 points in 53 games.

He was picked up by the Blues who acquired him earlier in the day from Salmon Arm Silverbacks.

Zasitko was a 4th round pick of the Stampeders in 2018 MJHL draft and suited up with the Rink Hockey Academy last season compiling 21 points in 25 games.