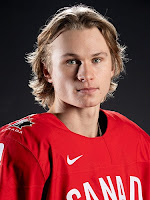 Spencer Knight made 34 saves, and the United States topped Yorkton's Kaedan Korczak (pictured above) and Team Canada 2-0 to win the world junior hockey championship in Edmonton on Tuesday night.

The Canadians were undefeated at the 2021 tournament and aiming to repeat as gold-medal winners, but had to settle for silver after running into a strong American team.

The U-S won six straight games to capture its fifth under-20 title following a round-robin loss to Russia on opening day.

For the 19 year old Korczak, he dressed for all 7 of the Canadian and registered one point.