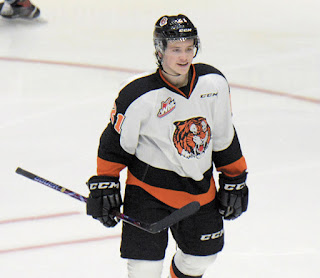 It's almost been one year since a game was played in the Western Hockey League, but that'll change tonight (Fri) as the Central division in Alberta kicks off their 24 game 2021 schedule.

Yorkton's Brett Kemp is one of three 20 year old's on the Tigers' roster and he says he's pretty anxious to get his final year in the WHL underway.

"I'm pretty excited to get things back going and to be back with the boys and get a little normality in my life again and I'm looking forward to getting the games going."

Kemp is a veteran of over 230 career WHL games and in a year and season like no other, he's looking forward to see what he can do in this abbreviated campaign.

The 20 year old, unlike some of his teammates was able to suit up in some hockey games earlier this season when he suited up with his hometown Yorkton Terriers of the SJHL.

"That was pretty cool experience, I mean growing up watching and going to Terrier games with your buddies you dreamed of one day possibly wearing that jersey, so it was great experience for me to get back on the ice and make some new relationships.

Kemp had 3 goals and 7 assists for 10 points in 6 games before the SJHL season was suspended back in November.


Full chat with Brett Kemp below: