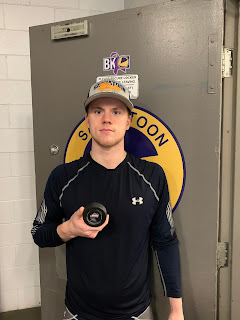 Yorkton's Nolan Maier is now a part of the history books for the Saskatoon Blades.

The 20 year old became the winningest goalie in team history last night (Wed) after stopping 29 shots to lead his team a 3-2 win over the Winnipeg Ice in Regina.

The victory was his 86th of his WHL career and he says it's pretty surreal to top the list.

"It's pretty special that's for sure, I don't think I really thought about the feat when I was drafted here as a 15 year old, but to achieve that and to celebrate with my teammates was pretty cool," Maier said to reporters after the game.

The mark was previously held by fellow Yorkton Mauler alumni and Melville product Tim Cheveldae, who held the record since 1988.

Maier admits it was even more special to pass him, as Cheveldae served as his goalie coach for the previous three seasons.

"It feels more sweeter for sure, just having him as a mentor for all those years with me and I know I'll text him and just thank him for all he did for me and taught me."

Maier and the Blades improved to 9-0-2 on the season with the win and they'll return to the ice in East Division hub in Regina on Friday at 8PM Sask time against the Moose Jaw Warriors.