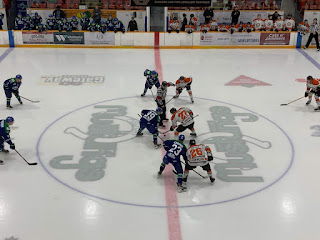 The Yorkton Terriers dropped the opening game of their SJHL Quarter-Final on Friday, 4-1 to the Melfort Mustangs.

The Mustangs struck first just 7:41 in as Clarke Huxley finished off a nice passing play to notch home his 1st goal of the playoffs to make it 1-0.

It would stay like that until 35 seconds left in the period as Melfort went in on a 2 on 1 and a blind back-pass from Noah Wilson found Thomas Moore back-door and he made no mistake to make 2-0 for the home-side after 1 period.

Melfort added to their lead just 3:44 into the 2nd frame as Zac Somers walked in over the blue-line and beat Kael DePape over the left pad to increase their lead to three.

But just under 4 minutes later, Tanner Sklaruk got the Terriers on the board as he took a nice back feed from Maddux Nollski and his wrister beat Joel Favreau top-shelf over the left shoulder to cut the Terriers' deficit to just 2.

Clarke Huxley though regained the Mustangs' three goal lead short-handed for his 2nd of the night making the score 4-1 for Melfort after 2 periods.

The two teams played to a scoreless 3rd period.

Mustang goalie Joel Favreau made 27 saves on 28 shots to earn the victory in goal, while Kael DePape made 27 saves in the losing.

The two teams will meet in Game 2 of the Best of 7 series on Saturday night. GX94 will broadcast the game, starting with pregame show at 7:20 and play by play begins at 7:30PM from the Northern Lights Palace.

Kishaun Gervais scored 5:54 into the 2nd overtime helping the Yorkton Terriers to a 4-3 win on Saturday night over the Melfort Mustangs.

AP Cade Kennedy opened the scoring 6:02 into game, while Zach McIntyre and Karsten Kruska padded the lead to 3-1.

Kael DePape made 45/48 saves to pick up the win, while Joel Favreau faced 58 shots, stopping 54 including all 20 he faced in the first overtime.

The Yorkton Terriers took a 2 games to 1 lead in their Best of 7 SJHL Quarter-Finals series after a 2-1 overtime win in Game 3 over the Melfort Mustangs.

Greg Nelson scored the game winner just 7:15 into the first overtime period for his 1st of the playoffs.

Parker Jasper tied the game with 4:30 left in regulation after Tye Scherger opened the scoring for the Mustangs just over three minutes earlier in the 3rd.

Terriers' G Kael DePape made 30 saves on 31 shots to earn the victory in goal, while Joel Favreau  stopped 31 shots for the Mustangs in the loss.

Game 4 of the Best of 7 series goes today (Mar. 23rd) from the Westland Insurance Arena.

The Yorkton Terriers now have a 3 games to 1 series lead in their SJHL Quarter-Final, after a 5-2 win last night (Wed) over the Melfort Mustangs in Game 4.

Karsten Kruska and Kishaun Gervais each had 1G and 1A for the Terriers', who got a 38 save performance from Kael DePape in goal.

Curtis Hammond netted both goals for the Mustangs, who head back home to host Game number 5 on Friday night.

GX94 will broadcast the game with "Legacy Co-op Terriers' hockey, the pregame show starts at 7:20 and the play by play kicks off at 7:30PM.

The Yorkton Terriers couldn’t clinch their SJHL Quarter-Final series on Friday night after Melfort stayed alive with a 5-1 victory in Game 5.

Marco Lopez had 1G 2A for the Mustangs, who got singles from Clarke Huxley, Thomas Moore, Noah Wilson and Tye Scherger.

Colby Vranai replied with the only Terrier marker.

Joel Favreau made just 22 stops for the Mustangs in the win, while Kael DePape replied with 40 saves on 45 shots in the loss.

The two teams will meet in Game number 6 on Sunday night for a 6:00PM puck drop.

The Melfort Mustangs have forced a Game 7 of their SJHL Quarter-Final series with Yorkton, after a 5-3 win in Game 6 over the Terriers.

The Mustangs got off to a 4-0 lead on goals by Ben Tkachuk, Leith Olafson, Seth McCulloch, and Dawson Leroux, while Nolan Doell also scored in the third,

Kishaun Gervais scored twice for the Terriers, who got a single marker from JD Hall.

Joel Favreau turned aside 28 of 31 shots in the win for Melfort, while Kael DePape replied with 26 stops in the Terriers' goal.

Erik Boers scored twice including the game winner with 4:23 remaining to lead the Yorkton Terriers to a 3-1 Game 7 victory over the Melfort Mustangs.

Kishaun Gervais also scored into the empty net while Kael DePape made 32 stops in the win.

Curtis Hammond has the only goal for the Mustangs, who got 32 saves from goalie Joel Favreau.

The Terriers now advance to take on the Estevan Bruins in round 2.

In the other series, it’ll feature the Flin Flin Bombers against the Humboldt Broncos.