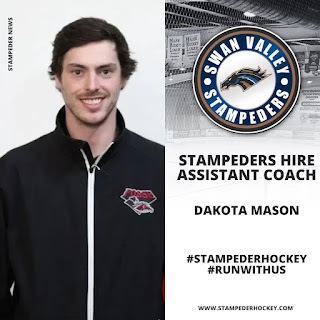 The Swan Valley Stampeders of the Manitoba Junior Hockey League are excited announce the addition of Dakota Mason as the team's new Assistant Coach.
The 30 year old Mason most recently spent this past season as Associate Coach & Head Scout with the Princeton Posse of the KIJHL.

Mason's playing career included one year in the NAHL and two years with the AJHL's Brooks Bandits including helping them capture a RBC Cup in 2013.

Stamps' Head coach & GM Barry Wolff chats about the hiring, the offseason and the upcoming Stamps' Hockey School below: