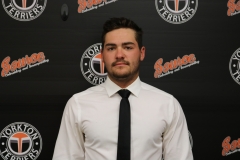 The Yorkton Terriers won the 10th and final regular season meeting of the season on Saturday, defeating the Melville Millionaires 7-2.

Quin Hobbs scored twice for the Terriers while Colby Brandt and Branden Klatt had 1G 2A also for the visitors.

Brendan Mark, Cody Bruchkowski and Evan Sare (1st SJHL goal) chipped in with singles for the Terriers who got a 36 save victory from Ryan Ouellette in the victory.

Jaden Shewchuk and Aidan Steinke replied for the Mils.

The Terriers and Mils wrap up their regular seasons on Tuesday night as Yorkton will visit Weyburn while Melville visits the Nipawin Hawks.

Melville will need a point at least and least a Weyburn regulation loss to earn the final SJHL playoff spot.

GX94 will broadcast the game with Yorkton Dodge Junior Hockey, "Sask Milk" pregame show begins at 7:20, PXP kicks off at 7:30 from the Cage.