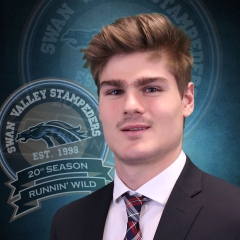 The Swan Valley Stampeders have pushed the Steinbach Pistons to the brink of elimination after a 6-3 Game 4 victory on Thursday night to take a 3-1 series lead their Best of 7 MJHL Semi-Final.

For the 2nd straight night the Stamps would get the opening goal as after some great pressure deep in the attacking zone, Bradly Goethals would walk out from the left corner and his back-hander would beat Matt Radomsky five-hole for his 6th of the playoffs to give Swan a 1-0 advantage after 20 minutes with the Stamps leading the shot column 21-10.

Alex Uryga (pictured above) would add to the Swan lead with an unassisted mark just 1:54 into the 2nd period, but just after that Jack Kilroy got the Pistons on the board just under 2 minutes later to make it a one game goal once again. The Stamps would quickly respond though as Josh Tripp would finish a tic-tac-toe passing play hammering in a cross-ice feed from Brad Goethals for his 6th of the playoffs that made it 3-1. Then Tucker Scantlebury would get one late in the middle frame for Swan with a nice back-hander to give them a 4-1 lead after 40 minutes. Shots after 2 were 38-21 Stampeders.

Declan Graham would cut their deficit within two early in the 3rd with a PP goal just 43 seconds in to make it 4-2. But once again another nice response for the Stamps with two goals from Matt Osadick and Josh Tripp to make it a 6-2 game. Kyle Bettens would add a late goal on the power pay with 52 seconds to go but thats as close as they would get.

Merek Pipes was solid in the Swan goal making 27 saves on 30 shots to get his 7th win of the postseason while Matt Radomsky turned aside 42 shots in the loss.

The Stamps now have a chance to book their ticket into their first ever League final with a victory in Game 5 on Saturday back in Swan River with puck drop at 7:30PM MB Time.


The other Semi-Final wrapped up as the Portage Terriers completed the 4 game sweep of Virden after a 5-2 victory over the Oil Capitals in Game 4 on Thursday .
Posted by Benny W at 20:19