Mauler General Manager Chad Korczak says they'll be bringing in a little bit of a smaller group of players for the camp.

"We will have around 65 guys in camp, and we went smaller just for the fact we aren't looking to fill the whole roster and it also makes it easier for evaluations and such."

Along with Korczak coming on board as the teams' GM, the club also announced this offseason that former Terrier coach Ed Zawatsky will return to the area to be the Head Coach.

"We're excited, he brings a lot of knowledge and for us its about advancing our guys to the next level whether its Junior or college or what ever route they wanna go and we feel that Eddy will give them the best chance to do that and the kids will learn a lot from him." 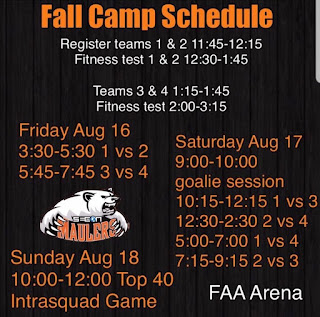