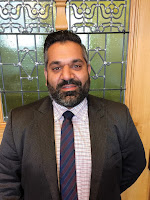 The Swan Valley Stampeders (MJHL) have hired Suneil Karod as the teams new Associate Coach.
Karod, a native of Nanaimo B.C., spent the past 10 seasons with the Victoria Cougars of the VIJHL, with the last 3 as Head Coach and GM.
During his time with the Cougars, Karod was part of five league championships, and 7 regular season titles.
He also spent time with the Chilliwack Chiefs of the BCHL as an assistant coach, where they went on to become National Champions in 2018.

The Stamps also announced that last year's Asst. Coach Ryan Bettesworth has stepped back from the coaching staff to focus on family and work commitments.
The Stampeders will hold their training camp this weekend and will kick off their 2019-2020 preseason, on September 2nd when they travel to Dauphin to take on the Kings.
Posted by Benny W at 06:28