The Steinbach Pistons used a 3 goal opening period to pace them to a 6-1 win over the hometown Swan Valley Stampeders on Sunday night.

The Pistons would strike first just 2:32 into the 1st period as newcomer Mark Wilson's long point shot would beat a screened Brett Evans for his 3rd of the season to make it 1-0. Austin Heidemann would make it 2-0 Pistons just over 6 minutes later as he would finish off a nice feed from Tyson McConnell for his 13th of the year. The visitors would add 2 more late goals off the sticks of Braden Purtill and MJHL leading scorer Bradley Schoonbaert to make it 4-0 Steinbach after 1 period. Shots 13-8 Pistons.

Steinbach would add to their lead almost half-way through the 2nd as Daniel McKitrick would lead a 2 on 1 rush, and slide it across to Brendan Martin who made no mistake for his 5th of the season making 5-0. Then just a short time later, it would be Tanner Mole, shorthanded with a slap-shot beating Ethan Peterson over the right pad to make it a 6 goal lead. But on that same penalty, the Stamps would get on the board as Quinton Sudom's nice low shot would get re-directed by Stamps forward Jaden Townsend for his 7th, making it a 6-1 lead but thats as close as Swan would get.

Reigning MJHL Rookie of the Month Matthew Thiessen stopped 24 shots to earn his 13th win of the season while Brett Evans got the start for Swan and allowed 4 goals on 13 shots. Ethan Peterson in his Stamps' debut relieved Evans and played the last 2 periods making 21 saves on 23 shots.

The Stamps next action will be on Tuesday night when they visit the Virden Oil Capitals at Tundra Oil & Gas Place. GX94 will broadcast the game with Yorkton Dodge Junior Hockey, pregame 7:20 pxp at 7:30.

In the lone game in the SJHL,

The Humboldt Broncos completed the weekend sweep of the Yorkton Terriers.

After a 8-3 win on Saturday, the Broncos came back with a 7-2 win on the road over the Terriers on Sunday night.

Connor Lukan (2G 2A) & Logan Schatz (4A) led the way for the Broncos with 4 point nights while Jaxon Joseph had 2G 1A.

Newcomer Parker Tobin made 23 saves in the Bronco net for his 1st SJHL win while Ben Laidlaw stopped 31 shots in the losing cause.

The Terriers next game will be on Friday night at Affinity Place when they visit their Viterra division rival, the Estevan Bruins.

Meanwhile in the WHL, 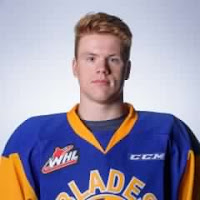 It was a big night for Yorkton product Nolan Maier.

Maier made 48 saves for his 1st Western Hockey League shutout to lead the Saskatoon Blades to a 4-0 win over the Western- Conference leading Portland Winterhawks on Sunday.