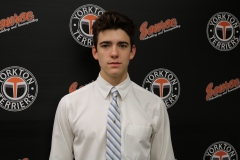 The Yorkton Terriers captured their 3rd consecutive game on Wednesday doubling up the Notre Dame Hounds 6-3.

Chantz Petruic scored his 10th and 11th goals of the season to lead the Terriers who got singles from Alec Zawatsky, Carson Henry, Ethan Robson (1st SJHL goal) and Tyson Janzen.

18 year old Cooper Kennedy (pictured above) made 33 saves on 36 shots to net his 1st SJHL victory in the Terrier net while Riley Kohonick made 37 stops in the loss.

Devon Cyr had a Hat-Trick to lead the Bruins offensively while Isaiah Thomas had 2.

The Mils will return to action on Friday night when they host the Yorkton Terriers from the Horizon Credit Union Center with puck drop happening at 7:30PM