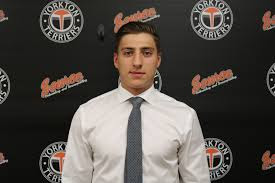 The Yorkton Terriers' halted a 5 game losing streak in a big way on Tuesday night defeating the league-leading Battlefords North Stars 6-2 at the Farrell Agencies Arena.

The loss was the first blemish to the Stars record which falls to 7-1 while the Terriers improved their record to 2-6.

Philippe Bond turned aside 43 of 45 shots to earn his 2nd victory of the season.

The Terriers will return to action on Saturday night when they host Melville while the North Stars continue their road-trip against the Millionaires tonight (Wed).

Stamps' continue to roll at MJHL Showcase in Winnipeg Make it 4 straight wins for the Swan Valley Stampeders.

The Stamps got a 1G 2A from 20 year old Tommy Cardinal to lead them to a 4-2 win over the Winnipeg Blues at the MJHL Showcase in Winnipeg.

Nathan Carl, Frazer Dodd and Josh Maucieri also scored for Swan who got a 16 save performance from Mikael Foucher in the win.

The Stamps will look for their 6th win of the season on Friday night when they host the Neepawa Natives. GX94 will broadcast the game with Yorkton Dodge Junior Hockey, pregame kicks off at 7:20 with the play by play starting at 7:30PM MB time.

The Waywayseecappo Wolverines let a 3 goal lead slip away en route to a 4-3 overtime loss to the Steinbach Pistons.

The Wolverines got out to a 3-0 lead in the 1st on goals by Tyler Leibl, Alex Lucken and Jaymes Knee before the Pistons stormed back to tie it up.

Codey Behun then netted the game winner on the PP with 1:25 in the extra period.

Liam Tereposky made 19 saves on 23 shots in the loss.

The Wolverines return to home ice on Friday night when they welcome the Winkler Flyers to the Wayway Arena Complex for 7:30PM puck drop.