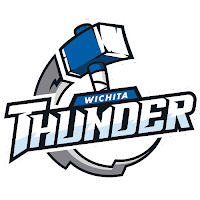 Yorkton Terrier alumni Chantz Petruic had plenty of options in front of him to continue his hockey career after completing a very successful Junior career with the Yorkton Terriers, but the path he went with took him south of the border.

Petruic, who was named the SJHL's Player of the Year and Most Valuable Player during the 2019/20 season, originally earlier this year decided to join the USports' Carleton Ravens but as things rolled out in 2020, he eventually decided to join the Wichita Thunder of the East Coast Hockey League.

"Ya every player wants to play pro hockey one day, and I believed this was a great opportunity for me and it gets me closer to my goal of playing in the NHL and with the Thunder their Head Coach Bruce Ramsey used to play against and Coach my dad Jeff so there was a relationship already there with him and I'm happy to join the Thunder."

The Moose Jaw product began his pro career back last Friday night and during that game he was able to score his 1st pro goal in the Thunder's 3-2 victory over the Tulsa Oilers.

"It was pretty exciting, obviously a lot of nerves and you don't know what to expect going in because you've never played a pro game before, but ya it was nice to get on the scoresheet but more importantly we got the win so that was nice."

Before Petruic headed down to Kansas to begin his professional career, he began his 2020/21 campaign playing Senior hockey with the Highway Hockey League's Raymore Rockets where he had 6 points in 2 games.

Petruic and the Thunder return to action on Boxing Day when they visit the Kansas City Mavericks.

Full Chat with Petriuc below: