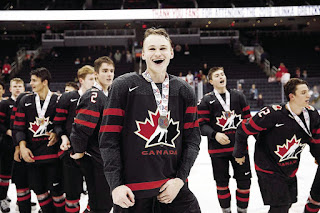 For the first time in almost 20 years, a Yorkton product will suit for Team Canada at the World Junior Hockey Championships.

Kaedan Korczak will join likes of Jarret Stoll as a local product who'll get to represent his country at the Under 20 event after he was named to the final 25 man Canadian roster that was announced on Friday.

"It's definitely a dream come true, it's something that I've wanted for a while and to have my mom, dad and little brother Ryder deliver the news to me on FaceTime was pretty special", Korczak said during a phone interview with GX94 on Friday night.

Korczak who completed his 4th season with the Rockets this past Spring, and Team Canada will look to defend their World Juniors Gold this time on home soil and he says expects his role to not change a whole lot from his club team.
"I expect to put into that shut-down role on the back-end, playing against other teams top lines and I'm looking forward for to the challenge to play against other countries top players."

Korczak and Team Canada will play two pre-tournament games before they begin games for real on Boxing Day when they open up the championships against Germany.

Korczak chats about his selection to Team Canada below: