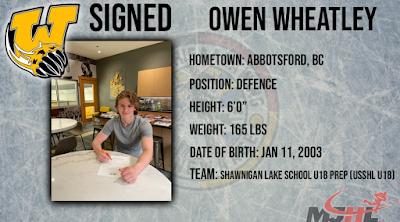 The Waywayseecappo Wolverines are excited to announce that Owen Wheatley from Abbotsford, BC has signed a letter of intent with the team for the 2021-22 season.

The 6’0”, 165-pound defenceman has played the last two seasons with the Shawnigan Lake School Under 18 Prep team in the Canadian Sport School Hockey League, scoring 12 points (three goals, 9 assists) in 36 games in 2019-20.

Wolverines' Head Coach Taylor Harnett says Owen’s former coaches had nothing but great things to say about him.

“Speaking with his former coach Kevin Cooper and hearing all the positive qualities that Owen will bring to the team on and off the ice, really made our decision easy,” says Harnett. “The fans can expect a player that will defend really well and also provide some good offensive opportunities.”