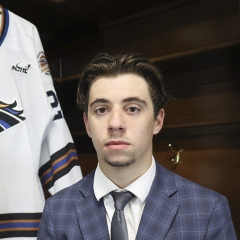 The Swan Valley Stampeders got a little revenge on Sunday after beating the Neepawa Titans 5-4 on Sunday night, which was two nights since the Titans won in SO back on Friday.

The Titans got off to a quick start in the first period as they would notch a couple off the sticks of Mitch Thiessen and Jaeger LaPointe to give them a 2-0 lead after the first.

Swan Valley though came out quick in the 2nd and they were rewarded for their efforts as team leading scorer Jamie Valentino (pictured above)  cut into their deficit just 2:07 in with 5th of the season before Quinn Mulder added his 1st on the powerplay to pull Swan event at 2-2.

But the Titans, on a power play of their own, regained the lead as Thiessen added his 2nd of the night to give the home-team a lead after 40 minutes.

In the 3rd, just over 5 minutes in the red-hot Cody Barnes would be Johnny-On-The-Spot again banging over a rebound for his 6th of the season to tie the game.

Then while on their 5th power play of the night, the Titans would turn it over in their own zone and Jamie Valentino made no mistake going five-hole for his 2nd of the even to put the Stampeders' ahead for the first time.

After overtime solved nothing, the Stampeders got shootout goals from Valentino and Brad Fortin, while Rylan Gudnason netted the only goal in three opportunities for Neepawa.

Stamps' G Kobe Grant turned aside 22 shots to earn his 1st MJHL win, while Emerik Demers in the Titans' net made 21 saves.

The two teams will meet in the 3rd of their 4 game mini-series on Friday night once again at the Yellowhead Center in Neepawa starting at 7:30PM MB time.

The Waywayseecappo Wolverines earned win number 7 on the season on Sunday, a 5-1 decision over the visiting OCN Blizzard.

Logan Wotton (2G 2A) and Andrew Boucher (1G 3A) led the way offensively for Wayway with 4 points each, while Troy Hamilton and Max McNeil scored singles.

Brock McDonald scored the only goal for OCN.

Tresor Wotton turned aside 25 of 26 shots in the Wolverines' net to earn the win.