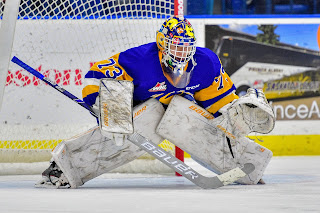 Maier stopped all 20 shots he faced on Friday night to earn his record-breaking 121st career WHL win in goal in the Saskatoon Blades 2-0 win over the Prince Albert Raiders.

The Yorkton Minor Hockey alumni whose in his 5th season with the Blades past Tyson Sexsmith and Corey Hirsch who both had 120 victories.

Maier also spent time with his hometown Yorkton Terriers (SJHL) during the 2017/18 season.