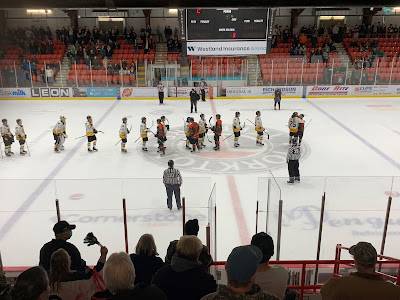 The Yorkton Terriers' had their 2021/22 campaign come to an end on Thursday night after a 7-2 loss to the visiting Estevan Bruins in Game 4 of their SJHL Semi-Final series.

The Bruins got off to a quick start in the 1st with goals from Keagon Little, Eric Pearce, Olivier Pouliot and Mikol Sartor to make it 4-0 through 1 period.

Caelan Fitzpatrick, Eric Houk, and Aleksa Babic also scored for the Bruins, while Kishaun Gervais and Colby Vranai replied for the Terriers in their final Junior games.

The Bruins now advance to the SJHL Final, with their opponent being either the Flin Flon Bombers or Humboldt Broncos.