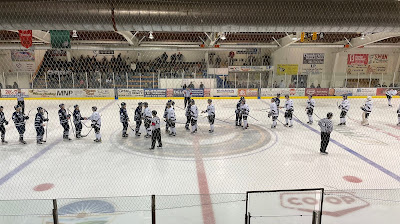 The Swan Valley Stampeders had their 2021/22 season come to an end on Sunday night after a 3-2 loss in double overtime to the Dauphin Kings in Game 6 of their first round MJHL Playoff series.

Kaden Bryant scored his 2nd goal of the game with 6:45 left in the 5th period to vault his team to round 2.
Nakodan Greyeyes also scored for the Kings, while Trey Sauder and Justin Keck replied for the Stampeders.

Both goals were fantastic in between the pipes as Kings' G Carson Cherepak made 40 saves on 42 shots in the series clincher while Kobe Grant in the Stamps' crease turned aside 47 shots.
The Kings will now take on the Winkler Flyers in 2nd round, while top-ranked Steinbach Pistons face the Virden Oil Capitals.