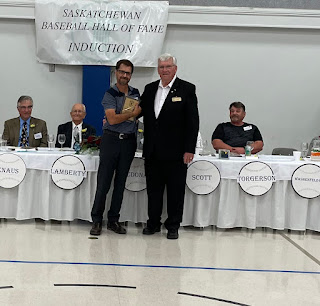 "Pretty speechless, I've got to be honest."

That was the reaction that Yorkton's Brooks Washenfelder had when he got the call earlier this year that he would be one of the 2021 inductees in the Saskatchewan Baseball Hall of Fame.

Washenfelder was part of enshrinement of 13 individuals, two teams, and one family that were celebrated this past weekend a part of the induction dinner in North Battleford.

"I would like to thank two guys, Linus Westberg and Lorne Harasen who asked if they could put my baseball resume forward for the Hall, and I'm grateful for them in doing that."

Washenfelder, who has been a part of a number of very successful baseball teams over the years winning a number of provincial championships including the most recent one in 2012, but it's the relationships that he's made that he loves about the game.

“I met a lot of good friends through baseball whether it was through coaching or playing, and it was these relationships that kept me involved many years after I was finished playing at a competitive level,”

Audio chat with Brooks Washenfelder below: