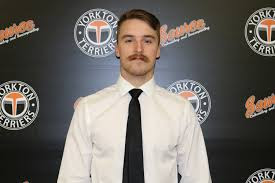 The Terriers would be the only team to get on the board in the 1st, as the puck would squirt out for Quin Hobbs who would go out on a clear-cut breakaway and he would make no mistake going top shelf for his 11th of the season to give his team a 1-0 lead after 1 period.

Mason Mullaney (pictured above) would add to the Terriers lead just 1:41 into the 2nd, as he would take a nifty feed in front from Colby Brandt and slip it through the five-hole of Jordan Frey for his 8th to make it 2-0. Then 9:32 into the middle frame, it was a partial break and would go short-side shelf for his 29th of the year to make it a 3 goal game. Mullaney and Petruic would add their second goals of the period, their 9th and 30th goals respectively to give the home team a 5-0 lead after 40 minutes.

In the 3rd period, the Ice Wolves would get on the board, 2:33 in as Stewart Pond would walk out and beat Andrew Henderson over the left board for his 4th of the campaign to make it 5-1. But the Terriers would respond with 3 quick goals of their own from Brendan Mark, Quin Hobbs and Mason Mullaney who completed his 1st SJHL Hat-Trick at the 10:25 mark of the 3rd period and the game sat at 8-1 Yorkton. Also later in the 3rd, Chantz Petruic would complete his Hat-Trick and net his 31st of the season while Zack Bannister and Jake Gudjonson would wrap up the scoring with a couple more for the Ice Wolves to make it a 6 goal Terrier win.

Andrew Henderson turned aside 34 shots in the Terriers' goal to earn his 10th vicotry of the season while the Ice Wolves had both of their goaltenders make appearances in the game. Jordan Frey played the first two periods and was relieved after allowing 5 goals on 29 shots while Brendan Benoit in relief turned aside 9 of 13 shots.

The Terriers will have the night off today (Thurs) before embarking on two-game weekend road trip this weekend, on Friday in Flin Flon before tangling with the Nipawin Hawks on Saturday night.

Melfort  F Justin Ball became the first SJHL player in 8 years to score 50 goals as he had one of the goals to lead the Mustangs to a 6-4 victory over the Melville Millionaires.

Carson Albrecht scored twice for the Mustangs while Kayle Tosh, George King and Colin Schmidt chipped in with singles.

Sam De Melo, Aidan Steinke, Luke Nkwama and Luke Spadafora replied for the Mils who got 29 saves in the loss from G Berk Berkeliev.

The Mils have now lost their last 7 games, but still sit with a 2 point lead on the Weyburn Red Wings for the final playoff spot in the SJHL standings.

Melville will host the Red Wings on Saturday night, but before that the Mils welcome the La Ronge Ice Wolves on Friday

Josh Tripp and Brad Goethals had 3 points each to lead the Swan Valley Stampeders to their 10th straight win on Wednesday slipping by the OCN Blizzard 5-3 at the Centennial Arena.

Tripp had 1G 2A and Goethals had 2G 1A while Carter Cockburn & Matt Osadick chipped in with singles.

19 year old Michael Davis made 31 saves to improve his record to 16-2 on the season.

The Stamps' improved their record to 39-10-3-2 on the season and sit now just 4 points back of the Portage Terriers for top spot in the MJHL standings.

Swan Valley will begin a 3 games in 3 night road trip on Friday night with a visit to Stride Place to take on the Portage Terriers.

The Waywayseecappo Wolverines strengthen their grip on the final playoff spot in the MJHL standings after a 6-3 victory over the Dauphin Kings.

The Wolverines now sit 6 points up on Winkler for the 8th position.

20 year old Isaac Labelle turned aside 24 of the 27 shots to earn the victory in goal for the Wolverines.

The Wolverines return to action on Friday night when they visit the Virden Oil Capitals at Tundra Oil & Gas Place.