Terriers, Wolverines and Stampeders all victorious on Friday night 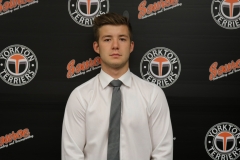 
The Yorkton Terriers snapped a two game losing streak in a big way on Friday night defeating the Melville Millionaires 11-4 on the road.

The line of Chantz Petruic (2G 1A), Colby Brandt (2G 2A) and Cody Bruchkowski (2G 3A) combined for 12 points to lead the way while Branden Klatt, Aiden Bulych, Greg Mulhall, Cole Keenleyside and Dino Antoniadis also scored for the Terriers.

Luke Nkwama had 2 goal for Melville in the loss while Luke Spadafora and Sam De Melo chipped in with singles.

Ryan Ouellette stopped 30 shots to earn his 15th win of the season while Colby Entz (4 goals on 17 shots) and Berk Berkeliev (20 saves on 27 shots) both saw time between the pipes for the Mils.

The two teams will play the back end of the weekend home and home series on Saturday night at 7:30 from the FAA.

Brad Goethals had 1G 3A while Merek Pipes made 40 saves to lead the Swan Valley Stampeders to their 7th straight win defeating the Portage Terriers 4-2 on home ice.

Joey Moffatt and Ty Barnstable replied with singles for Portage.

The Stamps with two games in hand now sit 6 points back of the Terriers for top spot in the MJHL standings and they will return to action on Saturday night when they entertain the Waywayseecappo Wolverines at 7:30 from the Centennial Arena.

Isaac Labelle made 37 saves for his 3rd shutout of the season as the Wayway Wolverines blanked the OCN Blizzard 4-0 on the road.

Kylar Fenton, Jack Fenton, Dylan Soosay and Karsten McDonald scored for the Wolverines while Jake Bestul chipped in with 3 assists in the win.

With two games in hand, the Wolverines now have a 4 point edge on Winkler for the 8th and final playoff spot in the MJHL standings.