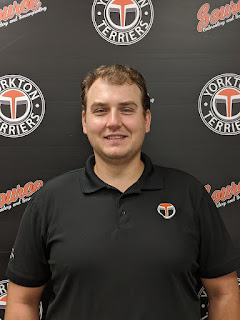 A familiar face will be re-joining the Yorkton Terriers organization.
Yorkton product and former Terrier player Dylan Johnson was announced as the SJHL club's new Director of Marketing and Public Relations on Monday.

"It's pretty exciting, I remember how much fun it was to be part of the Terrier organization and now being in a different role with them, I'm looking forward to bringing in some fresh ideas to get more fans engaged into the game and game day & to get more sponsorship dollars for the club."

The 26 year old just completed his college hockey career this past Spring with the Minot State Beavers, and graduated with a degree in marketing.

Johnson, played 3 seasons with his hometown club from 2012 to 2015 helping them win two league titles and the 2014 RBC Cup National Junior A championship.


Audio from with Dylan Johnson below: