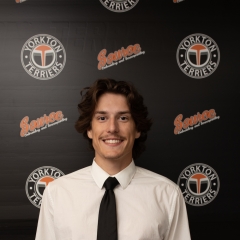 The SJHL is out with their first weekly award winners of the 2022/23 season.

Among those named include Yorkton Terriers' D Tyson Perkins who was named the league's Defenceman of the Week.

The Cochrane, Alberta product chipped in with 2 assists for the Terriers in their two opening wins over the Estevan Bruins this past weekend.

Other weekly winners included Nipawin's Bryden Kiesman as MVP of the Week, Joel Favreau of Melfort as Goalie of the Week and Carsten Kayter from the Humboldt Broncos was the Rookie of the Week.