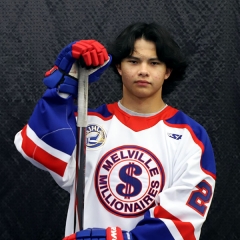 Noah Wills, Brayden Fryfogle and Carter McKay (pictured above) each had 1G 1A to lead the Melville Millionaires to a 4-1 win over the visiting Swan Valley Stampeders on Thursday night, for their 5th win of the preseason.

Breckin Den Hartog also scored for the Moneymen, while Jared Thompson had 28 saves on 29 shots for the win.

Josh Danis scored the lone marker for the Stampeders, who got a 33 save performance from Kobe Grant in a losing cause.

The Millionaires return to exhibition play on Saturday night at 6PM SK time battling the Dauphin Kings, while that was the finale of the preseason for the Stamps, who now shift their focus to their season opener next Friday hosting the OCN Blizzard.

Issac Nett had 2G 2A, while Andrew Boucher also chipped in with a 3 point night (2G 1A) to lead the Waywayseecappo Wolverines to a 7-2 thrashing of the Neepawa Titans in MJHL Preseason action.

Caden Carlson, Ben Roulette and Carson Baptiste also scored for the Wolverines, while Dean Noonan and Parker Murn replied for the Titans.

Jase Warham made 26 stops for the Wolverines in the win.

The two teams will play the back-half of their preseason home and home on Saturday at the Yellowhead Center in Neepawa.