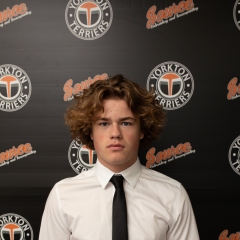 For the first time since the 2008/09 season, the Yorkton Terriers have started a regular season with three straight wins.

Brett Butz's (pictured above)  1st SJHL goal with 8 minutes left in regulation helped the Terriers to a 3-1 victory last night (Wed) over the Weyburn Red Wings at the Westland Insurance Arena.

Jackson Hassman (Weyburn) and JD Hall (Terriers) exchanged late 2nd period goals before Butz's game winner in the third, then Canora's Clay Sleeva iced the game into the empty net in the final minute of the third.

Caleb Allen made 24 saves on 25 shots in the Terriers' goal to earn his 3rd victory of the season, while Dazza Mitchell for Weyburn made 27 stops in the loss.

The Terriers' return to action on Sunday at the SJHL Showcase in Warman against the Nipawin Hawks.  GX94 will broadcast the game with Legacy Co-op Terriers' hockey,  the pregame show starts at 7:20PM and play by play kicking of at 7:30PM from the Legends Center.