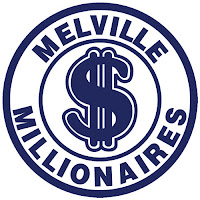 The Melville Millionaires' snapped a 2 game losing streak on Wednesday after a 5-3 victory over the La Ronge Ice Wolves on the road.

The Millionaires' for the 2nd straight night struck first as Felix Beauchemin walked in from the right circle and snapped home his 1st SJHL goal past Ice Wolves goalie Topher Chirico to make it 1-0, 8:32 into the 1st period.

Once again like on Tuesday night, the Ice Wolves responded as Kaycee Coyle's long point shot beat a screened Clement Labillois for his 1st to make it 1-1 through 20 minutes.

Just 1:23 into the 2nd period, the Mils grabbed their one lead back as Brayden Fryfogle finished off a nifty backdoor feed from Noah Wills for his 3rd of the year making it 2-1.

But the Ice Wolves responded once again on the powerplay as Flynn Maxcy capitalized on a rebound in front to pull the home-side back even.

Before the 2nd period buzzer went off, Millionaire captain Zach Cain regained their one goal lead heading into the intermission, with his team leading 10th of the season as he batted one home off a big bounce from the lively end boards.

Ryley Morgan though early in third scored the Ice Wolves' 2nd powerplay goal of the night banking it off a Mils defender in front to knot the game back up at 3-3. But Cooper Chisholm jammed home the eventual game just 3:38 later to make it 4-3 before Moosomin's Kayden Skulmoski iced into the empty net to seal the victory.

Clement Labillois got his 2nd straight start for Melville and made 37 saves to earn his 3rd win of the season while Topher Chirico stopped 41 of 45 shots in the loss.

The Mils will have a day off on the road trip on Thursday before continuing their roadie on Friday night in Flin Flon against the Bombers. GX94 will broadcast the game with the pregame show starting at 7:20 and the play by play kicking off at 7:30PM MB time from the Whitney Forum.

Lowie Vreys had 2G 1A in his Yorkton debut but it wasn't enough as the Terriers' dropped their 5th straight, a 6-3 decision to the Humboldt Broncos at the Westland Arena.

Ben Motew made 22 saves for the Broncos in the win, while Caleb Allen made 37 saves on 43 shots in the losing cause.

The Terriers' go right back at it on Thursday in Wilcox against the Notre Dame Hounds.