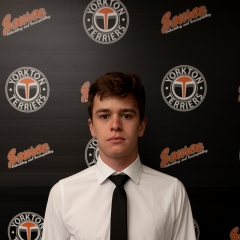 Karsten Kruska scored the lone goal in the shootout to lead the Yorkton Terriers to a 5-4 win over their rivals, Melville Millionaires on Friday night to improve their record to 5-1 on the young SJHL season.

The Millionaires got goals from Zach Cain (2), Noah Wills and Brayden Fryfogle.

Terriers' G Caleb Allen (pictured above)  was the difference turning aside 50 of 54 shots in the win, while for the Millionaires, Jared Thompson made 28 saves.

The two teams will once again meet on Saturday at the Westland Arena in Yorkton at 7:00PM.

The Swan Valley Stampeders dropped a 3-2 shootout decision on Friday in Virden against the Oil Capitals.

Nolan Chastko scored the lone goal in the shootout to get the home-side the extra point while Dean Gorchynski and Nathan Guthrie scored for Virden in regulation.

Trey Sauder and Jakob Jones replied for the Stamps, who got another solid performance from Kobe Grant who made 38 saves.

The Stampeders' return back home to take on the Waywayseecappo Wolverines on Saturday night.

Speaking of the Wolverines, they fell on home ice in overtime, 3-2 to the OCN Blizzard.

Sebastian Hamming was the hero for the Blizzard scoring 56 seconds into the extra period.

Ryan Monias and Kieran Cooke also scored for OCN, while replying for the Wolverines was Jack Clarke and Cole Carlson.

Wolverines' netminder Tresor Wotton turned aside 26 of 29 to take the loss in goal.