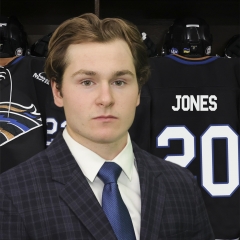 The Swan Valley Stampeders captured their 6th straight win on Friday night, a 2-1 overtime decision over the Virden Oil Capitals.

The Oil Caps got the only goal of the opening frame as Layton Veitch finished off a tic-tac-toe play in front and snapped in his 1st of the season at the 15:54 mark of the first to make it 1-0 for the visitors after 20 minutes.

Warren Marcotte tied it up for the Stampeders just 58 seconds into the 2nd period short-handed as off a good fore-check then Trey Sauder scooped it up and center it to Marcotte in the slot and the Calgary product made no mistake to make it 1-1 through 2 periods.

After a scoreless 3rd period, overtime was needed and with just 10 seconds left in extra-time, Jakob Jones (pictured above) was able to jam home his 2nd straight game winner to earn the Stamps the 2nd point.

Stamps' G Kobe Grant earned his 12th win of the season making 20 saves on 21 shots, while Eric Reid in the Oil Caps' net turned aside 36 shots.

The Stamps' return to action on Sunday afternoon visiting the Dauphin Kings at Credit Union Place. GX94 will broadcast the game, starting with the pregame at 3:50PM and the play by play kicking off 3:00PM.

The Yorkton Terriers started their weekend road-trip up north with a 3-1 loss to the Flin Flon Bombers at the Whitney Forum.

Jeremi Tremblay, Cole Dupperrault and Matt Egan paced the offense for the Bombers, while Terrier captain Logan Cyca replied for the Terriers who got 35 saves from Caleb Allen in the loss.

The Terriers travel to La Ronge to battle the Ice Wolves on Saturday night.

Meanwhile in Melville, the Millionaires got a goal from Aidan Robson but dropped a 4-1 home matchup with the Humboldt Broncos.

Alec Saretzky, Matthew Van Blaircom, Cage Newans and Spencer Bell scored for the Broncos, who got 26 saves from Ben Motew in the victory.

Clement Labilliois had a 30 save performance for the Mils in the loss.

The Millionaires are back at it on Sunday night at 6:00 PM hosting the Estevan Bruins.