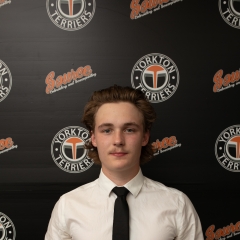 The Yorkton Terriers are now winners of 4 straight on home ice after a 4-3 victory over the Estevan Bruins on Tuesday night.
Owen Barrow opened the scoring early just over 2 minutes into the first to help the Bruins lead by one after 1 period.
In the 2nd, the Terriers' were able to finally break-through offensively as Clay Sleeva and Brett Butz were able to score just 2:08 apart to give Yorkton the 2-1 lead.
But the Bruins would respond just 73 seconds later as Gabriel Filion's shot squeaked by Caleb Allen for his 2nd of the season to pull the visitors back even 2-2.
The Terriers' regained the lead though with 5:19 left in the 2nd period as Terrier captain Logan Cyca (pictured above) forced himself on a breakaway after causing a turnover at his blue-line before going high glove on Cam Hrdlicka making 3-2 Yorkton through 40 minutes.

JD Hall added to the Terrier lead exactly 5 minutes into the 3rd, but once again the Bruins came back as Barrow added his 2nd of the game to pull them within one but that's as close as they would get.

Caleb Allen made 22 saves on 25 shots in the Yorkton net to earn his 12th win of the season, while Bruin G Cam Hrdlicka turned aside 41 shots in the loss.
The Terriers' return to action on Thursday night hosting the league-leading Battlefords North Stars from the Westland Arena.