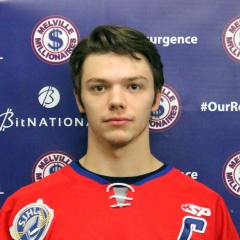 The Melville Millionaires won their 2nd straight on Friday night winning the 3rd Highway 10 battle of the season with a 5-3 win on the road over the Yorkton Terriers.

The Terriers would strike first as they would send the Teddy Bears flying as Parker Gavlas' point shot with sneak through goaltender Colby Entz for his 1st SJHL goal to make it 1-0. The Mils would respond with a powerplay goal of their own with 2:05 to go in the opening frame as Montana Streit would take a nice feed from Tucker Chapman for his 3rd of the year to even it up at 1-1 after 20 minutes. Shots 17-13 Melville.

The Mils would take their first lead of the night at 2-1, 5:56 into the middle frame as Damian Bentz would go in alone on Terriers net minder Joe Marcoullier and slip it five-hole for his 7th of the year. They would add to their lead a short-time later as Clayton Eisler (pictured above) would walk in and go top shelf for his 5th making it 3-1 Mils just over halfway through the 2nd period. Dayton Heino would add a powerplay goal late finishing off a nice passing play for his 5th with 1:24 to go in the second making 4-1 for the visitors after 40 minutes.

The home team would start a little bit of a comeback just over 8 minutes into the 3rd period as Evan Nicholas would flip one over goaltender Colby Entz for his 1st SJHL goal to make it a 4-2 game. Then just 1:51 later, Slater Strong on a nice individual effort would beat the Mils goalie far side with a nice snap shot for his 3rd to make it a one goal game at 4-3. But that's as close as the Terriers would get as Eisler would add some insurance for his team as his seeing-eye wrister would go off a body in front and past Marcoullier for his 2nd of the night to help secure the Mils their victory.

Churchbridge's Colby Entz made 30 saves in the Mils net for the win while Joe Marcoullier was very solid in the loss with 41 saves.

The two teams will go right back at it on Saturday at the Horizon Credit Union Center at 7:30.

**Just a reminder there is a Skate with the Mils after the game presented by the Melville & District Chamber of Commerce.