The Swan Valley Stampeders couldn't make it back to back victories on Wednesday night as they lost on home ice, 3-1 to the Virden Oil Capitals at the Centennial Arena in Swan River.

After a scoreless opening period, the Oil Caps would strike just over halfway through the 2nd. Jeran Knoll would capitalize on a Brett Evans mis-cue behind his own net and slide home his 10th of the season to give the visitors an early 1-0 lead. Just under 2 minutes later they would add to their lead as Graeme Hore would take a feed in front and go five-hole for his 6th of the year to give Virden a 2-0 advantage after 40 mins.

The Stamps would cut their deficit within one just 1:18 into the 3rd period as Gimli's Noah Basarab would redirect home his 4th of the season to make it 2-1. That's as close as Swan would get though as MJHL Player of the Week runner-up Kyle Salway would ice it for Virden in the final minute to give them their 12th win of the season.

Dalton Dosch won his 3rd straight game against the Stamps making 26 saves on 27 shots in the Virden net. 19 year old Brett Evans was once again solid in the Swan net stopping 38 shots in the losing.

Swan Valley will now head on the road for a couple more games this weekend visiting Winkler on Saturday and the Portage Terriers on Sunday night from Stride Place. 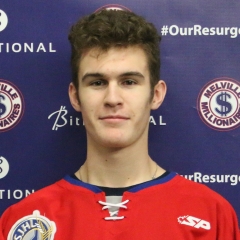 The Melville Millionaires earned their 6th win of the season on Wednesday coming back to beat the Notre Dame Hounds 2-1 in the shootout.

The Mils and Hounds will go right back at it on Friday night at 7:30 from the Horizon Credit Union Center.

The Melfort Mustangs held on for a 4-3 win over the visiting Estevan Bruins.
Posted by Benny W at 21:04