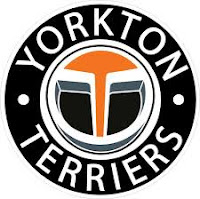 It was another busy day in the Terriers offices for newly hired GM/Head Coach Mat Hehr, as he made his first two trades.

In the first trade, the Terriers sent 20-year old forward William Brochu to the Kanata Lasers in exchange for 20-year old goaltender Joe Marcouiller. Brochu played in 18 games for the Terriers this season, recording 7 goals and 3 assists for a total of 10 points as well as 31 penalty minutes. Marcouiller started the year in the NAHL before joining Kanata. While in Kanata, he played in 6 games, recording a 3.26 GAA and 0.913 Save Percentage.

In the second trade, the Yorkton Terriers dealt 18-year old d-man Charlie Risk to the Drayton Valley Thunder in exchange for a Player Development Fee and Future Considerations. Risk played in 18 games for the Terriers, recording 1 goal and 9 assists for 10 points as well as 20 penalty minutes.

The Terriers would like to welcome Joe Marcouiller and his family to the Terriers organization. We would also like to wish Charlie Risk and William Brochu the best of luck with their new teams!
Posted by Benny W at 05:57