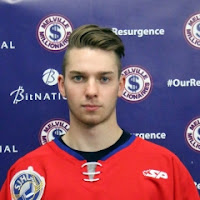 The Melville Millionaires extended their win streak to 2 games after a 4-0 win over the Yorkton Terriers on Friday night.

The Mils got on the board first just 8:08 into the opening period as Logan Foster would one-time home his 4th of the season through the five-hole of Ben Laidlaw to make it a 1-0 lead. They would strike again just 1:39 later, as Cory Schillo would sneak home his 9th goal of the season to give the road team an early two goal lead. Isaac Embree would give his team a 3 goal lead just one minute & 8 seconds after that with his 12th of the year that gave the Mils a 3-0 lead after 20 minutes. Shots were 17-6.

The Moneymen would add to their lead once again early into the 2nd as Damian Bentz would finish off a nice passing from Shane Sherban and Daniel Liberty & redirect home his 15th of the season to give the Mils a 4-0 lead just 1:54 into the middle frame. Shots were 14-9 Melville in the 2nd and 31-15 total for the Mils after 2 periods.

The 3rd period went scoreless as the Mils held on for the 2 points.

Mils netminder Colby Entz (pictured above) made 26 saves for his 1st shutout of the season while for the Terriers, goalie Ben Laidlaw got the start for Yorkton and was pulled after allowing 3 goals on 8 shots. Joe Marcouilier relieved Laidlaw and made 32 saves on 33 shots.

The two teams will meet for the back half of the home and home series on Saturday night at 7:30 from the Horizon Credit Union Center.

Flin Flon over the Melfort 6-4 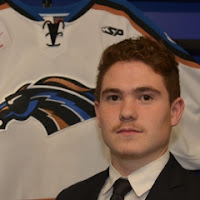 The Swan Valley Stampeders on the strength of a 4 goal third period defeated the Selkirk Steelers 5-2 on the road.

Josh Tripp (pictured above) had 2 of those goals while Shane Roulette, Connor Navrot and Derek Frater also scored.

Ethan Peterson made 26 saves for the Stamps to earn his 6th straight victory in goal.