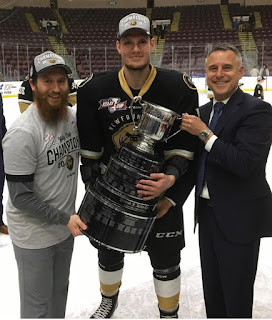 The Newfoundland Growlers which included former Swan Valley Stampeder D Garrett Johnston captured the 2019 Kelly Cup championship with a 4-3 win over the Toledo Walleye on Tuesday.

Game 6 of the Finals at Mile One Centre in St. John's, N.L. saw the Growlers bring home the province's first-ever professional sports championship.

The 24 year old Winnipeg product who played one season with the Stamps during the 2012/13 campaign had 7 points in 23 playoff games with the Growlers.

Johnston had 35 points in 59 games with the Stampeders then went on to play 3 seasons in the QMJHL with the Moncton Wildcats and Chicoutimi Saguneens.
Posted by Benny W at 06:23