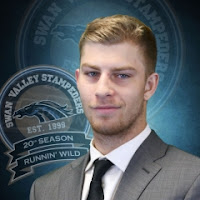 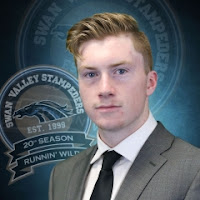 The Swan Valley Stampeders have completed their futures deal with the Lloydminster Bobcats (AJHL) in the trade that sent F Tucker Scantlebury to Swan River back on January 4th.

This past season he had 40 points in 54 regular season games while chipping in with 12 points in 17 playoff games.

This season he served as the teams Captain scoring 36 points in 51 games before he suffered a season-ending injury during the 1st round of the 2019 MJHL playoffs against Dauphin.

The Ile des Chenes, MB product had 1G 1A for 2 points in 12 regular season games with Oil Caps after being acquired on Jan 10th.


Stamps Asst. Coach/Director of Player Personnel Darren Webster talks about the trades, off-season and this Sunday's MJHL Draft below:

The Waywayseecappo Wolverines made two trades on Saturday.

First off the Wolverines acquired 16 year old F Matthew McLeod from the Winkler Flyers for futures.

In their 2nd trade, the Wolverines acquired 1999-born F Kyle Uzelman from the Red Lake Miners (SIJHL) in a trade that completes the futures from a previous deal between the two clubs.

The product of Sherwood Park, AB had 52 points in 51 games with the Miners this past season.
Posted by Benny W at 10:56