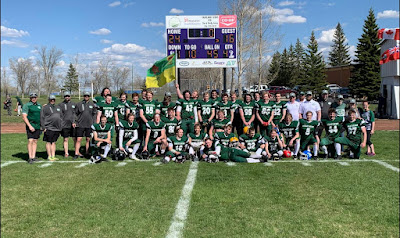 The 2022 Challenge Cup, 9 a-side football showcase game between two prairie provinces went yesterday (Mon) in Melville, an for the 2nd straight time it was Team Saskatchewan coming out on top.

Saskatchewan beat the team from Manitoba, 24-16 on the strength of two rushing touchdowns & a field goal from Melville's Charlie Broda.

"We got off to a really good start, but give credit to Manitoba who really played well and made it hard on us throughout the game, but in the end we will able to execute enough to prevail with a full team effort", said Team Sask Head Coach John Svenson.

Indian Head's Owen Woidyla scored the other touchdown for Saskatchewan while Xavier Mowbray and Kirsten Moshenko of the Swan Valley Tigers replied with the scores for Manitoba.

"I just can't thank everyone involved enough, from our presenting sponsor Prairie Co-op to all the other sponsors & volunteers to the caterers to everyone, without those people and businesses stepping up, these events can't happen", Svenson adds.