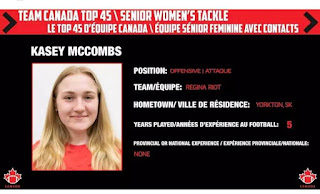 Football Canada has announced the final 45 player roster for the upcoming World Female Tackle Football Championships this summer in Finland.

Among those selected include Yorkton product and former Yorkton Lady Gridder Kasey McCombs.

McCombs, who now suits up with the Regina Riot of the WWCFL, will represent Canada now at the World Championships taking place in Vantaa, Finland from July 28th to August 8th.

Lemberg’s Chris Andrews, who is a Melville Minor Football alumni, was named the Canadian reserve roster for the tournament.

Full roster can be found HERE