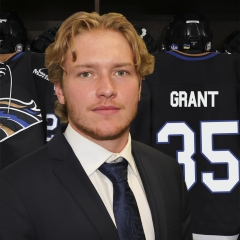 The visiting Terriers struck first in the opening period just 7:22 in as Austin Peters buried home his 12th of the season through the five-hole of Stamps' G Kobe Grant to make it 1-0.

But the Stampeders responded and tied it up at 1-1 as Jakob Jones forced a turnover deep and sent it in front to Josh Danis who sniped his 2nd of the year with 7:15 left in opening period to go to the first intermission knotted up.

Swan Valley netted the only goal of the 2nd with just 15 seconds left in the middle frame on the PP as Collin Jennings' long point shot was tipped in nicely by 19 year old F Alex Walicki for his 5th of the season making 2-1 Stampeders through 40 minutes.

In the third just 4:36 in, Walicki added his 2nd of the night while shorthanded as he chipped away a puck at the blue-line and then went in alone on a breakaway and made no mistake making it 3-1 before Jakob Jones iced it with his 20th of the season into the empty net with just over 2 minutes to go in regulation.

Kobe Grant (pictured above) was very solid in the Stamps' net making 37 saves on 38 shots, while Terriers' netminder Jayden Catellier stopped 23 shots in the loss.

The Stampeders' return to action on Saturday hosting the Selkirk Steelers, while the Terriers make the trek up north to OCN to battle the Blizzard.

Ty Mason led the way for the Red Wings with 1G 2A each while Ryley Morgan, Jackson Hassman and Jacob Kalin.

Jaxon Martens goal in his 3rd straight game was the only offence from the Mils, who got 33 saves from Clement Labillois in the loss.

Dazza Mitchell turned aside 23 shots to earn the victory.

The two teams will meet each again on Saturday in Melville.