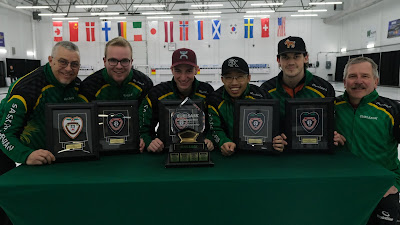 The CURLSASK Junior Provincial Championships took place this past weekend in Swift Current with Balgonie's Elizabeth Kessel and the Martensville's rink of Logan Ede leading their teams to the women’s and men’s titles.

On the men’s side, Ede, a Kipling product, held on for a 10-5 win over Josh Bryden from Regina

The Ede rink had some other local ties in Whitewood product Austin Krupski at lead, and Yorkton's Gerry Adam serving as Coach.

Kessel and her rink defeated Cara Kesslering 6-3 in the semi-final on Sunday before beating Madison Kleiter of Saskatoon 11-7 in the championship game.

The two rinks will now represent Team Saskatchewan at the New Holland Canadian Junior Curling Championship that will take place in Rouyn-Noranda, Quebec, from March 25 to April 2.