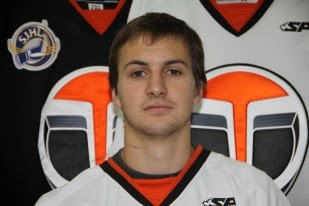 The Yorkton Terriers now have a 3 point lead in Viterra division standings over the Melville Millionaires as they defeated the Mils in overtime 3-2 on Friday night at the FAA.

It was a start that the Mils wanted in period 1 as they got the first goal just 2:05 into the opening frame as Chris Stovall would bang home a loose puck for his 3rd of the season to make it a early 1-0 lead. The Mils would control much of the first half of the period before the Terriers would take over in the 2nd half, but it would be Mils' goalie Isaiah Plett keeping his team in it as the Terriers couldn't convert as they out shot the Mils 15-7 after 1 period of play.

The middle frame would be much more even as the play would go back and forth for much of the period until 1:57 left in the period when Dylan Johnson would jump on a loose puck and put into the empty net past a sprawled out Isaiah Plett for his 3rd of the season, and it was also the goal sent the Teddy Bears onto the ice with 3rd annual Terriers Teddy Bear Toss with all the teddy bears being donated to the Salvation Army's Christmas Cheer Program. All in all it would stay even at 1 after 40 minutes.

In the 3rd, after a couple of near chances the Terriers would grab their first lead of the night as John Odgers would sneak one through the five-hole of Plett for his 2nd of the season to make it 2-1 Terriers. Then with 3:10 to go in regulation, the stick of Chase Norrish would come up and clip Kelvin Walz and it would draw blood so Norrish would be off for 4 minutes, and 2:09 into the double minor Tyson Predinchuk would even it up for the Mils with his 8th to force overtime tied at 2-2.

Then in OT with the Terriers having much of the control, would get the winner as Devon McMullen (pictured above) would jump on the loose puck in the slot for the winner to give the Terriers a 3-2 OT win.

Kale Thomson stopped 25 shots for the win while Isaiah Plett stopped 34 of 37 shots in a losing cause.