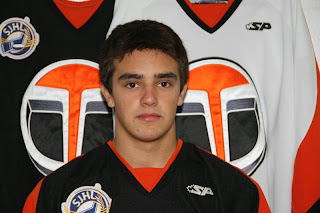 The Yorkton Terriers played their 2nd straight solid home game and moved into 1st place in the Viterra division over the idle Melville Millionaires, as they hammered the La Ronge Ice Wolves 6-2 on Wednesday night.

One of the main reason for the success on this night, was a very solid 1st period and they would be credited for their efforts with 2 markers, one by Daylan Gatzke, his 3rd goal in 3 games and also Zack Zadarozniak (pictured above) who notched his 3rd goal of the season to give the Terriers a 2-0 lead after the 1st, outshooting the Ice Wolves 14-4 in the process.

The 2nd period would start much like the 1st, as the Terriers would increase their lead to 3-0 as the red hot Dalton Menke would capitalize on a loose puck for his 4th goal of the season. The 2nd half of the 2nd period, the Ice Wolves would come on with some late pressure, but Riley Medves who would be get his 4th start of the season would stand tall and deny any pucks from making their way to the back of the net.

In the last frame, it would be the Terriers powerplay going to work as Jordan Ross would convert on his 8th of the season to push the Terriers lead to 4-0. But La Ronge would show some life as they would get their own powerplay goal as the long point shot from Eric Macoretta would find its way past Medves to cut the Terriers lead to 4-1. Tayler Thompson would come right back on the powerplay as his long wrist shot would make its way over the left pad of Tyler Fuhr to give the Terriers a 5-1. Then for good measure and to cap off a very good night for him,Zack  Zadarozniak would bang home his 2nd of the night and 4th of the season to give the Terriers a 5 goal, 6-1 lead. The Ice Wolves would get the last marker of the game on the powerplay as Landon Robin would deflect home a Brett Hope shot from the point, but it wasn't enough as it would be a 6-2 Terrier final.

Riley Medves was very solid between the pipes stopping 27 of 29 shots for his 3rd win of the season while Tyler Fuhr stopped 29 shots in a losing cause. Both teams' powerplays were 2 for 4 on the evening.

The Terriers will host the 1st game of the home and home Highway 10 battle on Friday night, 7:30 Puck Drop from the FAA. Pregame show will get going on GX94 at 7:20 with Yorkton Dodge Junior Hockey. Melville will host the Terriers on Saturday at the HCUC.

The Swan Valley Stampeders dropped their 2nd straight to the OCN Blizzard and 3rd overall as they fell on home ice 6-3 to the Blizzard.

Mitch Deacon, Max Provencher and Evan Morden chipped in with the Stamps goals while Nathan Armstrong stopped 38 of 44 shots in a losing cause.

The Stamps will be off until Tuesday when they visit the Dauphin Kings.
Posted by Benny W at 21:00