Ochapowace's Bear selected to Team West for World U17 Challenge 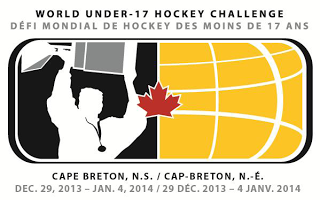 Saskatchewan Hockey Association and Hockey Manitoba are pleased to announce the roster for Team West participating in the 2014 World U-17 Hockey Challenge held December 28th January 5th, 2014 in Cape Breton, NS and one local player was selected.

Ochapowace's and Defenceman Ethan Bear was selected to the team. Bear currently is a member of the WHL's Seattle Thunderbirds and currently has 4 points in 17 games this season.

The World Under-17 Hockey Challenge will feature some of the world's top 1997 born players from Canada, Czech Republic, Germany, Russia, Sweden, and United States.
Posted by Benny W at 11:57