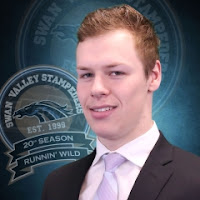 The Swan Valley Stampeders are now just one victory away from the first MJHL Turnbull Cup title after their 4-3 triple overtime over the Portage Terriers on Tuesday night in Game 5.

The Stamps for the 2nd straight game would open the scoring as this time it would be Kasyn Kruse took a nice feed in front from Alex Uryga and make no mistake for his 7th of the playoffs to make it 1-0, 11:20 into the opening period.

But the Terriers would respond with a late one with just 31 seconds left in the 1st as Ty Barnstable would sneak behind the Stamps D and take a nice stretch pass from Owen Murray and snipe it blocker side on Merek Pipes to make it an even game at 1-1 after 20 minutes.

Portage would grab their first lead of the night at 2-1, 7:36 into the 2nd as Chase Brakel would rifle home his 6th of the postseason over the left shoulder of the Stamps goalie.

But before the 2nd would wrap up the Stamps would respond as Josh Maucieri after a big face-off win would find a wide-open Matt Osadick in front and he would beat former teammate Ethan Peterson for the Grande Pointe, MB product's 9th of the playoffs to tie it up at 2-2 after 2 periods.

In the 3rd, the Terriers would regain their lead as Jay Buchholz would scoop it past Pipes to make it 3-2 Terriers. But the Stamps would rewarded a late powerplay and would convert as Brad Goethals long point shot would get re-directed in by Brian Harris to even it up at 3-3 and force the overtime.

After a back and forth first 2 overtime periods the Stamps would convert on their PP chance in the 3rd OT period as Brad Goethals (pictured above) took a nifty feed in the hight-slot and would beat Ethan Peterson over the right pad for his 3rd OT winner of the playffs to earn the Stamps the big Game 5 win.

Merek Pipes earned his 2nd straight win in the series making 44 saves on 47 shots while Ethan Peterson turned aside 37 shots in the losing cause.

The Stamps will host Game number 6 of their Best of 7 series on Thursday night against the Terriers from the Centennial Arena. GX94 will broadcast the game with Yorkton Dodge Junior Playoff Hockey with the pregame show kicking off at 7:20 and the Play by Play starting at 7:30 MB time.

In the SJHL Canalta Cup Final,

Brayden Buziak had the GWG to lead the Battlefords North Stars to a 4-2 victory over the Melfort Mustangs in Game 3 of their Best of 7 series,

The North Stars now lead the series, 2-1 and will be in Melfort for Game 4 of the series on Wednesday night from the Northern Lights Palace.
Posted by Benny W at 23:15