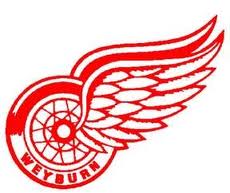 The Weyburn Red Wings have named their new Head Coach.

The team announced on Monday that former NHLer Rich Pilon will be the team's 9th bench boss in team history..

Pilon comes with a prolific playing career that included a 15-year NHL career where he made stops in New York and St. Louis, playing for both the Islanders and Rangers as well as the Blues

Since his retirement, he's had a few coaching gigs some time coaching in the Sask. Midget AAA Hockey league with the Saskatoon Contacts and Saskatoon Blazers.

The team also said that current General Manager Tanner McCall will stay on with his current role ahead of his fourth season with the club.
Posted by Benny W at 05:45