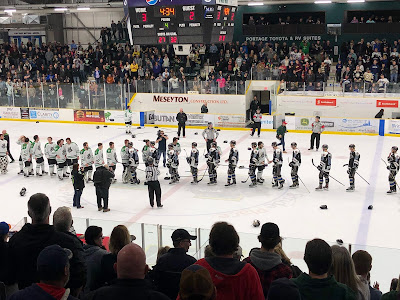 The Swan Valley Stampeders were gunning for their first MJHL Turnbull Cup title in team history but their pursuit ended in heartbreak after a 3-2 OT loss to the Portage Terriers in Game 7 of the championship series on Monday night.

The Terriers would open up the scoring in the deciding game striking first as Sam Huston took a nice feed on a 3 on 2 rush from Ty Barnstable and he would walk in and go top-shelf on Merek Pipes for his 7th of the playoffs to give the home team a 1-0 lead after 1 period.

Portage would begin the 2nd period with a 1:22 of a 2-man advantage but they wouldn't be able to capitalize on it as the Stamps' PK came up huge killing it off. The Stamps would grab some momentum from that as they would get on the board, 6:29 into the middle frame as Matt Osadick would walk in from the right-wall and his wrister would go bar-down on Nathan Moore for his 8th of the postseason to even it up at 1-1.

But Portage would respond though just 2:13 later, as Orca Wiesblatt's drop pass would find 20 year old Chase Brakel who sniped it home to give the Terriers a one goal lead once again this time after 2 periods.

Swan Valley would remain one down until just 7.3 seconds left on the clock when while short-handed  and the goalie pulled, Josh Tripp would slide it over to Matt Osadick whose first shot was stopped then he would tuck his own rebound past Nathan Moore for his 2nd of the night to force overtime for the 3rd time in the series tied at 2-2.

In the extra period, Regina product Reece Henry would be the Game 7 hero as off a partial break he would go forehand, backhand past Merek Pipes to help seal the Terriers their 12th league title in franchise history.

Nathan Moore would make 30 saves on 32 shots to get the victory in the Terriers goal while Merek Pipes, in what would end up to be his final Junior game would turn aside 25 shots in the overtime loss.

The Terriers now advance to the 2019 Anavet Cup that'll kick off on Friday night in Portage La Prairie when they host the SJHL champion Battlefords North Stars.

Also congrats to the Stampeders on a great season and especially to the graduating 20 year old's Josh Tripp, Brad Goethals, Campbell Balk, Quintin Sudom, Alex Uryga and Tucker Scantlebury on heck of Jr. careers and wish them the best going forward.


Webster chats about Game 7, the season and starts about the graduating 20 year olds


Webster chats Quintin Sudom and thanks everyone for the exciting season